The spring of 2018 journalism intensive remains one of the most formative experiences of my high school career. Here, I want to highlight my group-work for our final project concerning the passing of Ohio's highly restrictive abortion law referred to as the "heartbeat bill". My team focused on capturing voices from both sides of the spectrum, trying to understand why pro-life activism has been more effective than pro-choice on a social media and policy level. Below is the article that I wrote for our final project.

​Gerrymandering and the Youth Vote – Why Pro-Life Won This Time

Public Square crackled with electricity, the old and the young coming together with banners and rally cries. The cool, gray Cleveland evening served as a stark contrast to the passionate posters held by protesters. It was a day of action, and the brightness of the posters reflected the energy of the evening. 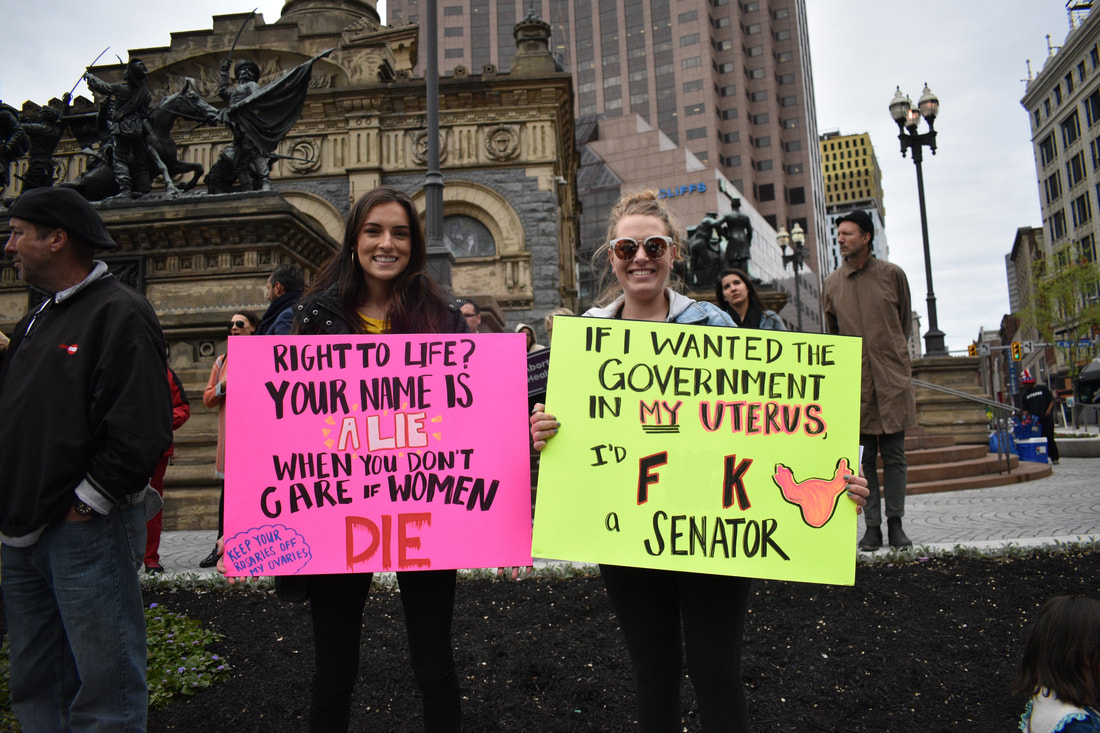 At the heart of it all, a group of quieter but no less passionate veterans of the fight for reproductive rights: Karen Friedman, Cindy Glazer, Cyndy Fellenbaum, and Ellen Scherner. Their words revealed a clear message.
“Get everybody to vote,” Fellenbaum urged. “This is very, very important. It’s the most important thing that you can do: get your friends registered to vote and vote. And vote for people that you know, are the same as you if you’re pro-choice. That’s the only thing you can do at this point.”

Leaders from both sides of the debate agree, from a policy perspective, it seems that the most concrete, approachable way to make policy change is through voting. However, low voter turnout and gerrymandering have prevented true policy change, research shows, and many people feel underrepresented by their elected officials.
One of the most distinct messages at Tuesday’s pro-choice rally was the most simple, encapsulating the entire issue of voter representation.
​
Representation is at the heart of the issue when it comes to legislating abortion rights. Then why don’t those on the pro-choice side feel represented by their government? 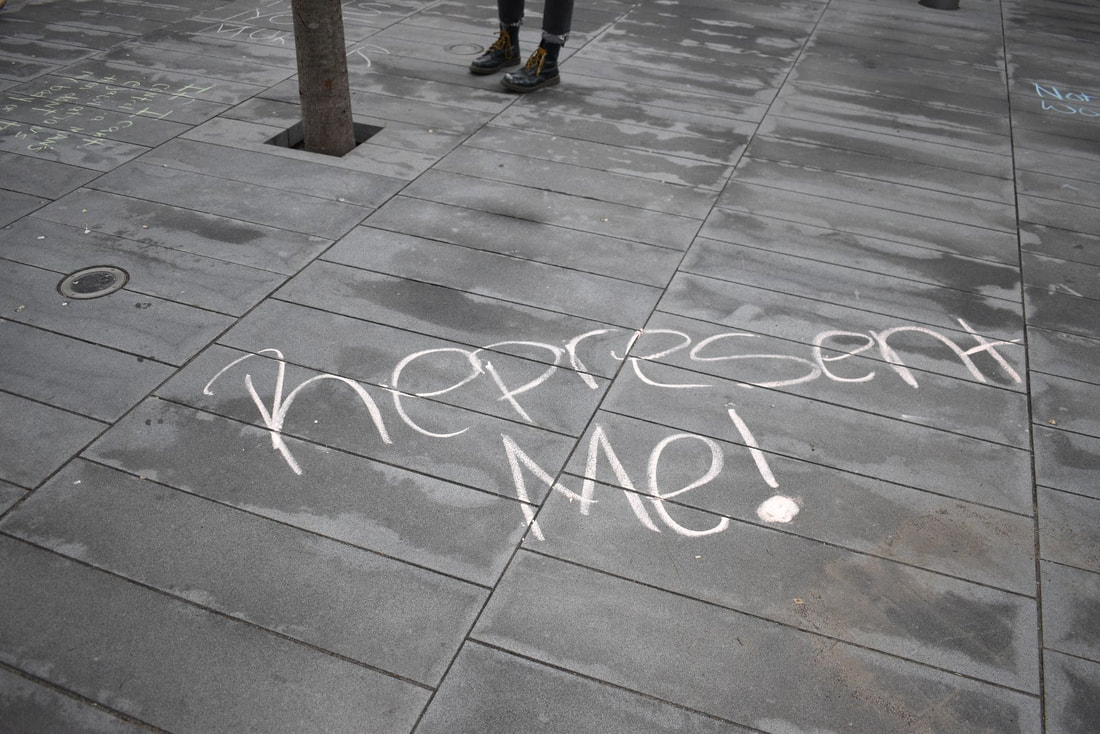 One of the most distinct messages at the #StoptheBans rally in Public Square on Tuesday, May 21 was the most simple, encapsulating the entire issue of voter representation. (Photo/Sophia Hanna)
​The Importance of the Youth Vote

Millenials have been accused of destroying many industries in the past few years: dining chains, starter homes, beer, napkins, the list goes on. In the abortion debate, however, both sides see the new generation as the key to the future.

“One-third of our participants in our Bringing America Back to Life convention are young people,” said Molly Smith, president of Cleveland Right to Life. “They’re from all walks of life. What we have focused on is bringing young people into the movement rather than creating a seperate movement for them.”

The pro-choice side has also shown deep investment in the next generation.

“We are renewed by the passion and dedication of a new generation of leaders in our movements,”  said Hannah Servedio, a spokeswoman from NARAL at Tuesday’s pro-choice rally.”We pledge to join them in building a future where everyone can access abortion safely, affordably, and locally free from punishment or judgement.”
Young and old, pro-choice and pro-life protesters all seem to agree on the importance of voting, research shows. Yet, there seems to be a disconnect. Only 23 percent of Ohio’s 18-24 year olds participated in the primaries, a Kaiser Family Foundation study claims.

“Not only is the turnout rate for young people typically far lower than the turnout rate over all, it also historically lags that of other age groups,” a New York Times article reported. “Midterm elections have been especially disappointing. In 2014, less than 20 percent of young people voted — the lowest rate ever — compared with roughly 40 percent of the general population, according to United States census data.”
​
On the other hand, youth turnout is up, an Atlantic article reported:
“Preliminary results from ABC exit polls suggest that voters ages 18 to 29 will make up 13 percent of the overall electorate in this year’s midterms, up from 11 percent in 2014. While early voting across every age group increased compared with the 2014 midterms, the surge is most pronounced among voters ages 18 to 29. More than 3.3 million voters from that group cast their votes early. That’s a 188 percent increase from 2014, according to data from TargetSmart, a political-data-analysis firm.”
The Role of Gerrymandering in Ohio’s Abortion Debate 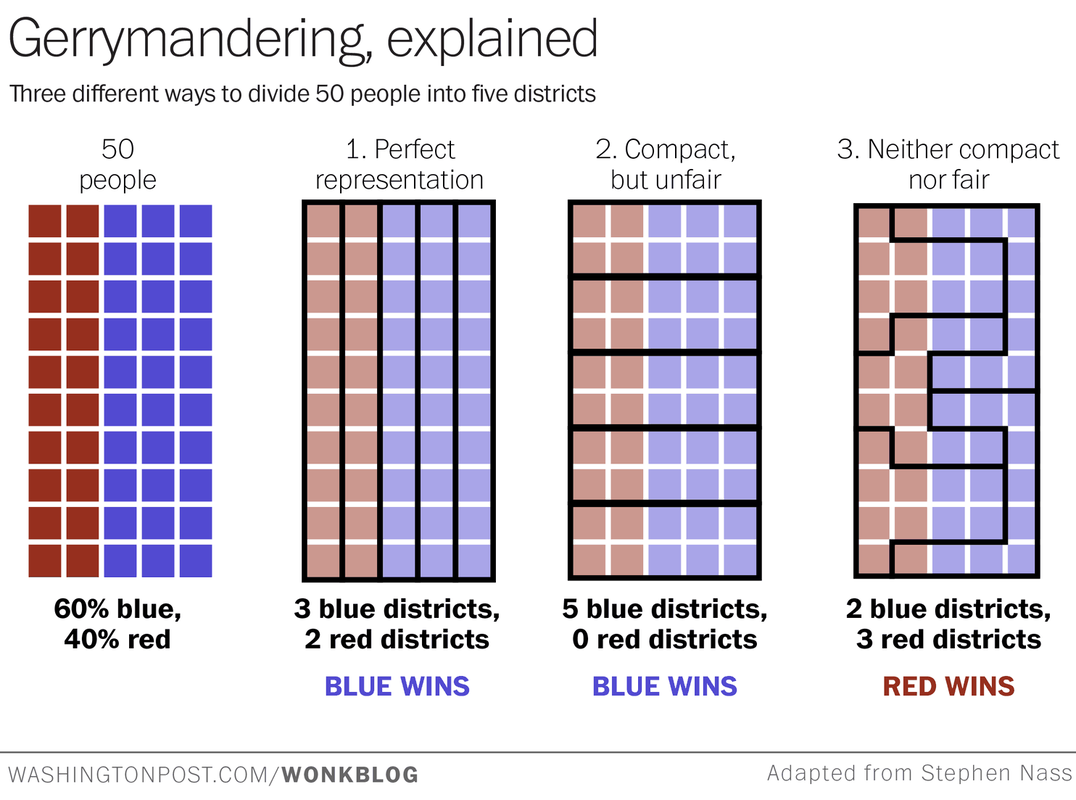 The practice of gerrymandering is complex and difficult to solve. Photo courtesy of the Washington Post
​Experts agree that gerrymandering plays a significant role in election outcomes, and Ohio is no exception.
“It [gerrymandering] gives an extreme advantage to Republicans,” said Jessie Hill, Case Western Reserve University law professor. “It puts them in such safe legislative districts that they don’t have to worry about alienating voters if they take sort of an extreme position on one issue or another that it just kind of makes this problem worse for sure.”
“The democratic votes all get watered down,” said Dr. Hersch, chair of the department of political science at Cleveland State University.

According to the Ohio Voter Project, there were 1,286,073 registered Democrats in Ohio for the 2018 midterms, countered with 2,010,469 republicans. That is 39 percent democrats to 61 percent republicans. There is a Republican-based majority, but these percentages do not translate to the makeup of the state house and state house of representatives.
In the Ohio State House of Representatives, there are 61 republicans and 38 democrats. In the Ohio State Senate however, the Republicans hold a 24-9 supermajority, 73 percent Republican to 33 percent Democrat. That does not match up with Ohio’s voter makeup, a result of gerrymandering.
​
“For the most part, people in most of these districts think their vote didn’t matter and that’s exactly what the gerrymandering was intended to do,” said Democratic party chairman David Pepper, reported WKSU.